Center Rock Turns to Heavy-Duty Doosans for Rescues and More

Center Rock, Inc., headquartered in Berlin, PA, is the world leader in canister drill technology (sets of drills and bits combined in one housing). Contractors in industry segments such as building, roadway, utility, oil/gas and mining use this equipment to quickly drill holes to the exact size required for the application.

Center Rock was founded in 1998 by Brandon Fisher, who knew the drilling industry lacked a product provider that could also quickly react to customers’ on-site needs. His goal was to fill that niche.

This concept was put to the test in a most dramatic fashion, when, in August of 2010, 33 miners near the town of Copiapo in Chile survived the collapse of 700,000 tons of rock into the mine shaft. The first estimate of a rescue date was Christmas. Brandon knew that Center Rock’s Technology could reach them much faster.

This wasn’t the first time Center Rock had come to the rescue. In 2002, the company’s equipment was instrumental in the Quecreek Mine Rescue in Pennsylvania, in which nine miners were rescued after being trapped for 78 hours in a flooded mine. 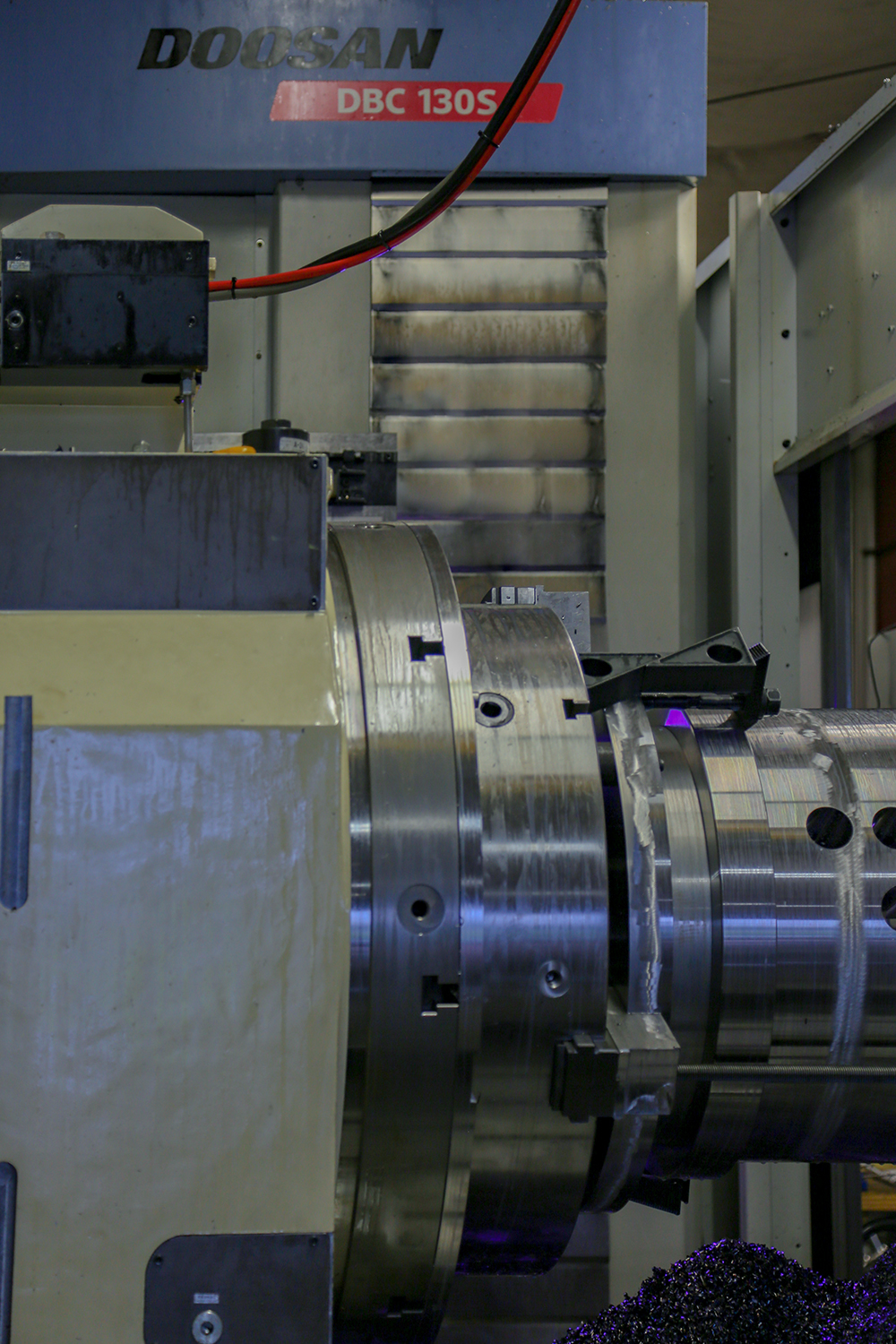 While the company doesn’t grab headlines every day, Center Rock customers routinely depend on the firm’s same engineering on-the-fly expertise and “can do” attitude to solve their drilling challenges. In a similar fashion, Center Rock depends on Doosan for the heavy-duty CNC machines that make their heroic efforts possible.

The parts made by the company are generally super-sized, so there is a lot of metal to remove. Individual drill bits range from 4” up to 36” in diameter. Cluster drills go from 24″ up to 132″ in diameter. The length of the drill depends on application. Monster pieces like this require big machine tools with rigid construction that can take on heavy cuts day after day.

That’s why the Center Rock facility is loaded with Doosan machines, from vertical mills to turning centers to horizontal boring machines to multitasking MX machines. “Doosan and their distributor, Allegheny Machine Tool Systems, have the same enthusiasm for problem solving that we do,” Brandon remarked. “That makes them a great resource when we’re working on a customer’s urgent situation.”

To keep control of quality and lead times, Center Rock wanted to bring large milling work in-house. Allegheny delivered a new DBC 130 horizontal boring machine equipped with a retrofitted oversized C-axis table. Allegheny worked with Doosan to help spec out the table and all its capabilities. This was the largest C-axis table ever to be put on a Doosan boring mill. This configuration allows Center Rock to tackle milling operations to different sides of a part in one setup. Machining time on certain components can last close to 2 days, but the machine has no problem keeping up with the workload. 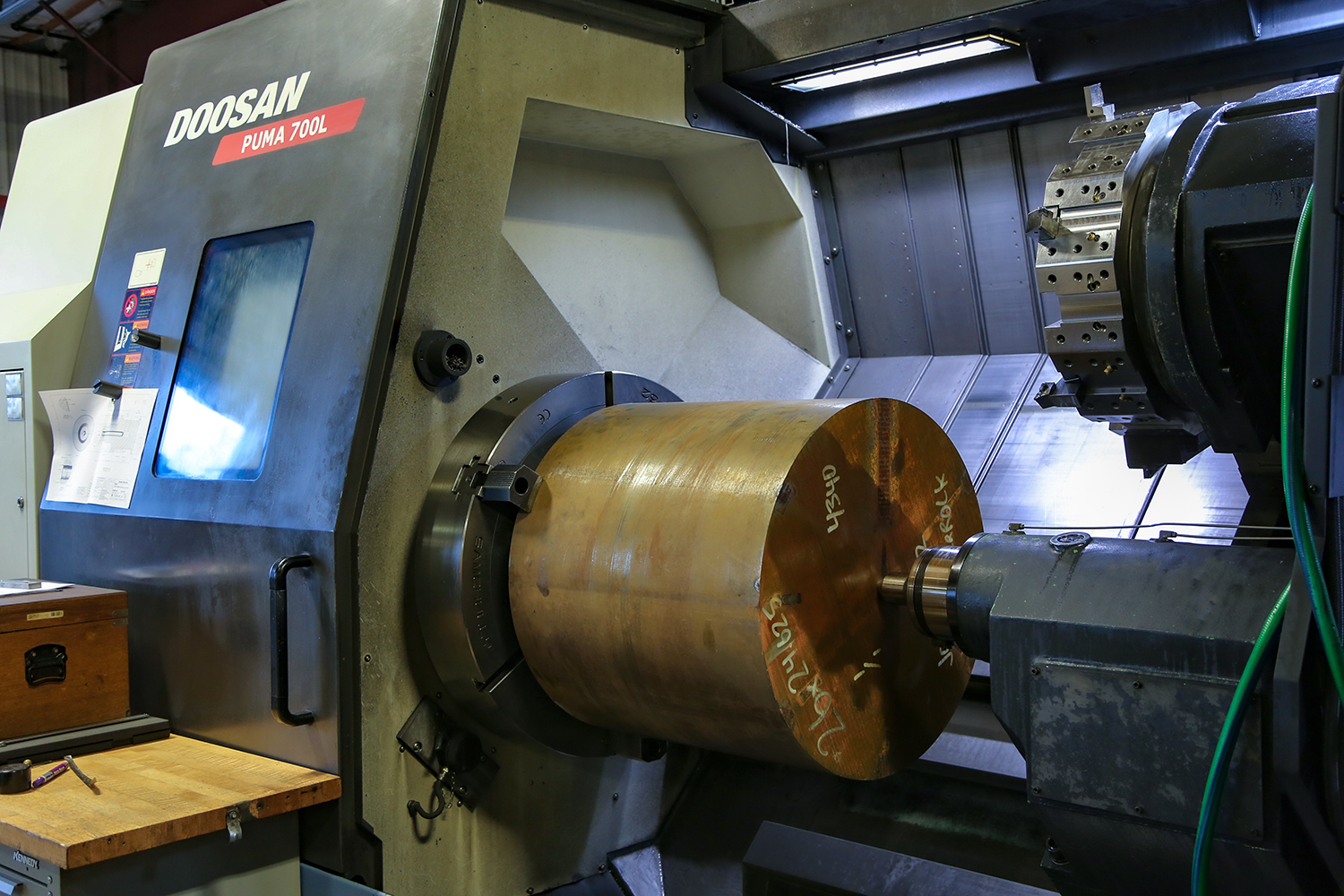 The PUMA 700L box way horizontal turning center is another big monster of a lathe with a huge main spindle chuck. Center Rock went oversized here as well. Allegheny did the install of the larger chuck, removed the factory tool setter, and then implemented a removable Renishaw tool setting probe. Raw stock that goes into this machine has a 36” OD, so steady rests were added as well.

The MX 3100 multi-tasking turn mill machines at Center Rock give them the ability to complete parts on one machine. Many of their turned workpieces require splining and milling at odd angles, which the B-axis milling head is capable of providing. Doosan’s flexibility to customize was important here as well. Some of Center Rock’s MX machines have built-in steady rests instead of a lower turret; something that deviates from standard specification.

“Over our 24-year history with Doosan, they have always backed us with any outside the box solutions (within reason) that we have suggested,” according to Dan Ambrogi, President at Allegheny. “They are more receptive and flexible than any other manufacturer we have been associated with.”

Since Doosan equipment has such attractive price points, Center Rock is able to invest in additional machines that allows them to bring work in-house. The ROI is much easier to justify than buying a Japanese competitors’ machine.

While your company may never be involved in a “life or death” rescue effort, you still want to be a hero to your customers. Doosan machines can make that happen. Contact us so we can discuss your particular challenges in detail.